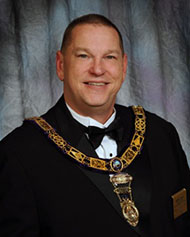 Our Grand Master was born September 1, 1964, the son of Edgar (E.L.) and Joyce Stout in Glasgow, Kentucky. He attended Temple Hill Elementary school and graduated from Barren County High School in 1982. He was in the Printing Ink Business for over 28 years traveling most of those years across our nation and internationally on business. He is currently employed at Onesource Water as an Account Executive. He is married to Cindy (Morrison) Stout and they have one son Logan. He has a daughter Kacey and two grandsons Kaden and Jackson Eli. He and his wife attend Southside Christian Church in Versailles, KY where they reside.

It was my honor to serve on this committee this year and I look forward to seeing and attending Lodge with Brother Chris at Landmark Lodge No. 41 in the years to come.