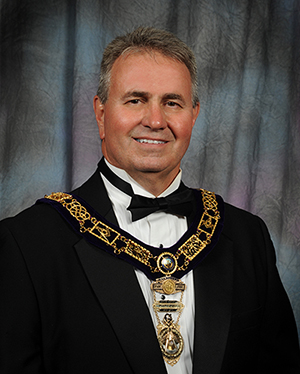 The Committee on Biography submits this report and asks this to be accepted and made a part of the 216th Annual Communication of the Most Worshipful Grand Lodge of the Kentucky F. & A.M.

Our Grand Master was born August 20, 1958 to William U. Wilder and Martha Grinnell of Paris, Kentucky. Our Grand Master attended the school system in Paris, KY area and graduated from Paris High School. He also attended Eastern State University. Brother Wilson stayed in the Paris area after his school years ended and married Sally Brannock in 1983. They have one son, Wilson G. (Will) Wilder who also followed in his father and grandfather's footsteps and joined the Blue Lodge that they were members of.

Brother Wilson has worked at farming in the Bourbon County area of Kentucky and has also worked in the cattle business as seen on his Grand Master's pin this year.

Brother Wilson belongs to the Paris First United Methodist Church in Paris, KY and has served as Chairman on the Board of Trustees.

Brother Wilder started his Masonic career in September, 2002 and was raised to the Sublime Degree of a Master Mason in November, 2002. Our Grand Master has a very active Masonic history. He has served in many of the Blue Lodge Offices of his home lodge. Brother Wilson was Master in 2005, 2006, 2007 as well as serving as District Deputy Grand Master in his home district.

Brother Wilson now belongs to Amity Lodge #40 and William O. Ware LOR 999. He is also a member of the R.A.M. Cynthiana 17, Grand Council of High Priest Harrison 106, receiving the Order of Knighthood in 2007. At Cynthiana 106 Brother Wilson also received all of the degrees at the Valley of Lexington Ancient and accepted Scottish Rite, also, a member of the Oleika Temple A.A.O.N.M.S. Our Grand Master served as High Priest in 2013, Grand Master of the Council in 2014 and Commander of the Commandry in 2013. Other honorable mention is Royal Order of Scotland KYCH 2015, KCCH, 2015, East Central Past Masters, North Central Past Masters, Society of the Past Masters of Southern Kentucky, Appalachian Past Master, York Rite Sovereign College, Council of Knights Masons Order of St. Thomas.

Brother Wilder's Masonic Light was starting to glow when he became inquisitive about Masonary through his close friends and his Father-in-Law. This made a man knock on the door of his home lodge with almost all of the basic principles of Masonary in his heart and did not know it yet, anyone who meets Brother Wilder is greeted with a smile and a warm hand shake.

Brother Wilson has served this most worshipful Grand Lodge of Kentucky with dedication and all of his heart. His home lodge is so proud of him and the things he has done for the Craft of Kentucky.

MANY MEN PASS THROUGH THIS WORLD, BUT ONLY A FEW REALLY GOOD MEN.