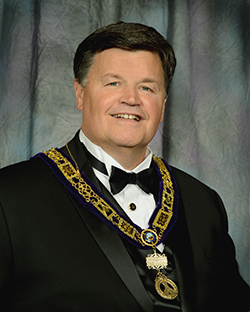 This document is to serve as the official Masonic biographical record for Geary F. Laird who served as the 210th Grand Master of the Grand Lodge of Kentucky, F.&A.M. during the 2019-2020 Masonic Year. He was elected and installed as such on October 22, 2019 at the 220th Communication of the Grand Lodge of Kentucky held at the Galt House Hotel on 4th street in downtown Louisville, Kentucky.

Brother Laird was born in Louisville, Kentucky on December 10, 1955 to Christine Klinglesmith Laird and Carroll F. Laird. He has two younger brothers, Harold Rich- ard Laird and Jodie Michael Laird. His maternal grandparents were James and Mollie Klinglesmith. His paternal grandparents were Melton and Mozelle Laird. Brother Laird married his high school sweetheart Terri Albro on May 14, 1977. Brother Laird and Terri have three children and one granddaughter. Their children's names are Chad Laird, Brett (Katy) Laird and Brooke (Les) Ostrander. Their granddaughter's name is Paisley Laird.

Brother Geary Laird and Terri are of the Christian Faith and are members of Ormsby Heights Baptist Church in Louisville, Kentucky.

Chad Laird, Brother Laird's son, is a member of Shawnee Masonic Lodge #830. Brother Laird performed the third Masonic Degree on Chad raising him to the sublime degree of a Master Mason on All Mason's Day, February 26, 2020. All Mason's Day is designated as such by the Commonwealth of Kentucky Legislative bodies and is held every other year. This tiled meeting was held in the House Chambers of the Kentucky State Capitol Building. Brother Geary Laird stated that making his son a Master Mason was one of the proudest days of his life.

Brother Geary Laird credits his father and father-in-law as his inspiration to submit a petition for the Masonic Degrees and for serving as his mentors during his Masonic career.

Brother Laird was awarded the Bluegrass Ritual Pin (in recognition of his high level of skill in delivering Masonic Ritual) in 2006, was elected to serve on the Masonic Homes of Kentucky Board of Directors (2016-2020) and received the DeMolay Honorary Legion of Honor in 2017.

AREAS OF FOCUS WHILE GRAND MASTER

Brother Laird chose to focus on several important areas while serving as Grand Master of the Grand Lodge of Kentucky. His motto for the Masonic Year was "Masons Making a Difference." He stressed involvement for all members either in ritual work, mentoring candidates, filling a lodge office, involvement in community events, making a positive difference in people's lives, etc. He also established a ritual competition to further the goal of quality ritual work. His statewide traveling program is based on the Masonic Trowel. Spreading the cement of brotherly love and affection is the focus of his program.

Brother Laird read the following statement at the 221st Grand Communication of the Grand Lodge of Kentucky F. & A.M. which was held at the Galt House Hotel in Louis- ville, Kentucky on October 19, 2020.

"Freemasonry, throughout Kentucky, our nation and the world has been adversely af- fected by the coronavirus pandemic. It is once again time for us, as men and Masons, to come together and push forward to ensure that our craft will stand the test of time. Throughout history Freemasonry has withstood and overcome obstacles including the Morgan Affair, The Spanish Flu Pandemic of 1917-1918 and The Great Depression to name a few. As we work together to reignite the fire of Freemasonry in the hearts and minds of quality men, we too, with the aid of the Grand Architect of the Universe, will prevail."

I am honored to have been selected by Most Worshipful Grand Master Geary F. Laird to complete his Masonic Biography.