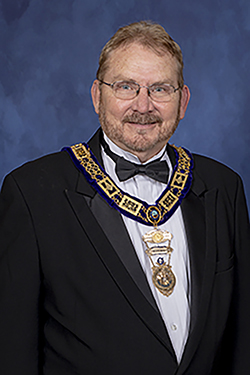 This document is to serve as the official Masonic biographical record for Ernest C. Jackson who served as the 211th Grand Master of the Grand Lodge of Kentucky, F.&A.M. during the 2020-2021 Masonic Year. He was elected and installed as such on October 19, 2020 at the 221st Communication of the Grand Lodge of Kentucky held at the Marriott Hotel East, Louisville, Kentucky.

Our Most Worshipful Brother Ernest Claude Jackson was born on November 16, 1954 at Beaver Valley Hospital, Martin, Kentucky, the son of the late Arlie Whitt and Ethel (Lovins) Jackson. He was the youngest son of twelve children. Brother Jackson attended the public schools of both Knott and Floyd Counties before graduating from Garrett High School with the Class of 1972. He later attended Mayo Vocational and Technical School, obtaining training as a diesel mechanic. Upon completion of his education, he began working in the mining industry and held several positions including mine superintendent. In 1993, Brother Jackson opened Garrett Auto Parts which he operated until selling the business to his nephew this past Spring.

A lifelong resident of Eastern Kentucky, he petitioned John W. Hall Lodge No. 950, F. & A.M. to receive the Degrees of Freemasonry and was initiated as an Entered Apprentice on March 25, 2000. Brother Jackson was passed to the Degree of Fellowcraft on April 22, 2000 and raised to the sublime Degree of Master Mason on June 10, 2000. He transferred his membership to James W. Alley Lodge No. 869 on September 01, 2002 and thereafter began to progress through the chairs, serving as Master in 2008-2009. After serving his term as Master of James W. Alley Lodge No. 869 he was elected Treasurer, and served in that position from 2009-2020. He has been awarded his Bluegrass Ritualist Pin from the Grand Lodge of Kentucky, and remains a proud Alley Cat.

On May 27, 2009 he affiliated by dual membership with Wheelwright Lodge No. 889, where he went on to serve as Master for the year 2012-2013 before demitting on July 22, 2015. He is also a member of Ted Adams Lodge of Research at Lowmansville. Most Worshipful Past Grand Master Christopher L. Stout appointed Brother Jackson to serve as his District Deputy Grand Master for District 28 in the year 2012-2013. After this he served as a member of the Grand Lodge Committee on Masons Helping Masons for two terms (2013-2014 and 2015-2016). Most Worshipful Past Grand Master Wilson K. Wilder appointed him to serve as Grand Marshal of the Grand Lodge of Kentucky for the year 2014-2015, and later he served as Chairman of the Grand Lodge Committee on Masonry Matters (2016-2017).

Brother Jackson's program this year has been "On the Level", and to promote this he commissioned the creation of a Traveling Level for the Grand Lodge of Kentucky crafted by Brother John D. Grider, a Past Master of Craftsman Lodge No. 722 in Liberty, Kentucky. Also, Brother Jackson instituted the first Grand Lodge Scholarship Program in our Grand Jurisdiction's history.

Throughout his service to the Craft he has been awarded Honorary Memberships in countless lodges, from Dycusburg Lodge No. 232 in far Western Kentucky to Thomas DeVenny Lodge No. 928 on the banks of the Tug River.

In addition to his roles in the symbolic Lodge, Brother Jackson is a Noble of El Hasa Shrine Temple at Ashland, Kentucky and a member of Virginia Spencer Chapter No. 573, O.E.S at Wayland, Kentucky. He is a charter member of the Appalachian Past Master's Society. Additionally, he was initiated into the Ancient and Accepted Scottish Rite, S.J. as a member of the Reunion Class of the Valley of Covington, Indra Consistory held at Chandlersville Lodge No. 858 in March, 2012. He later affiliated with the Valley of Lexington as well, and will be invested with the rank and decoration of Knight Commander of the Court of Honor in November of this year.

Brother Jackson is a member of Rock Fork Freewill Baptist Church, having been baptized in 1979. Among his civic awards are commissions as a Kentucky Colonel and Jackson General.

Brother Jackson's is married to his loving wife Jackie (Sammons) Jackson, a Past Matron of Virginia Spencer Chapter No. 573 and together they reside at Dana in eastern Floyd County. He is the proud father of two sons, Mikey Jackson and our late Brother Nick Jackson (869) and devoted grandfather of two granddaughters Mashayla Fugate and Cheyenne Jackson, and three grandsons Bro. Justin Jackson (869), Bro. Cody Jackson (869) and Shawn Jackson. He is also the great-grandfather of four, including: Bentley, Easton and Laila. One of the newest additions to his family is surely his favorite, his great-grandson Brantley Jackson.