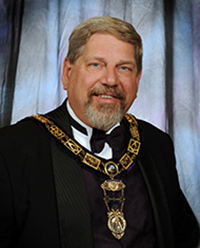 Our Grand Master was born on August 25, 1958, in Shelbyville, Ky. He is the only child of the late Brother Ray Wilson and Yvonne Nation. He was educated in the Taylorsville School system, graduating in 1976. After being employed by the Shelby County Emergency Medical Services and Nations Meat Company, among others, he founded Nationwide Heating and Cooling in 1984. He married his high school sweetheart, Karen Susan Weis, on August 20, 1976. They were blessed with three sons, Brian Thomas, Richard Boscoe, and Brother Quinton Ray Nation. Currently they have been further blessed with five grandchildren, Lilyanne Grace Weible, Sophia Faith Nation, Aiden Thomas Manning, Ella Faye Nation, and Kara Raye Nation.

Brother Rick was profoundly influenced by this Fraternity on December 21, 1963. On that day, his family home was destroyed by fire. Immediately, the Brothers of his fathers Lodge and other Lodges stepped up to provide relief and assistance for the family. They provided for a memorable Christmas for the five year child. When Brother Nation was introduced to Masonry Matters in 2007, it immediately resonated within his very fiber. He saw this program as an extension of the Charity that had been extended to him and his family many years ago. He saw it as an affirmation of why he had joined this Fraternity in the first place. He saw it as an example of what Masons should be doing. He immediately identified "Masonry Matters" as a program worthy of a Grand Masters support. He vowed if he was ever presented with the opportunity to promote the program statewide, he would lend it his fullest support.

Brother Nation became a member of the Ancient and Accepted Scottish Rite, Valley of Lexington on March 2, 1980. He was honored with the Rank and Decoration of Knight Commander Court of Honor (KCCH) on November 16, 2013. He became a member of Oleika Temple, A. A. O. N. M. S., on March 9, 1980. He joined the Shelbyville York Bodies in March 1980. He was inducted into the Royal Order of Scotland on September 10, 2011. He and Karen joined Rob Morris Chapter 114, O. E. S., on August 20, 2009. He has been honored to receive honorary memberships from several constituent Lodges of the Commonwealth of Kentucky and other Grand Jurisdictions. He has served this Grand Jurisdiction with honor and distinction. He has never wavered from his service to the Craft, even when the decision was painful to him personally. He has been forced to reprimand close personal friends and, at times, make unpopular decisions. But, he has always placed the health and well-being of this Fraternity above any personal consideration.